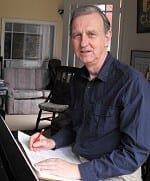 John Metcalf was born in Swansea in 1946. A joint UK/Canadian citizen, he is considered to be one of the foremost composers working in Wales today. Starting in the late 1960’s, his successful composing career has already embraced a large variety of work.

Major works have marked his development including five operas. Recent works that reflect a growing maturity include the lively Marimba Concerto (1991) written for Evelyn Glennie and Harp Scrapbook (1992), a musical diary of seven short pieces. Inner Landscapes for solo piano was composed in 1994 and other important instrumental works have followed; Rest in Reason, Move in Passion for violin, cello and piano (1994), Paradise Haunts for violin and piano (1995) and Mountains Blue Like Sea for cello and piano (1996). Other works for piano include Never Odd or Even and Sky High Cloud Light, both written in 1995 for the six-piano group ‘Piano Circus’.

Museum of the Air (1998), a work for large orchestra and mezzo soprano to poems by Gwyneth Lewis was recently given its first performance at St. David’s Hall, Cardiff by the BBC National Orchestra of Wales and Della Jones.

John Metcalf’s compositions are frequently performed and broadcast in many countries. Lorelt record company have made several recordings of his music. John is Artistic Director of the Swansea Festival of Music and also the Vale of Glamorgan Festival, whose artistic policy is to present exclusively the works of living composers.