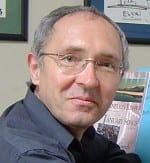 Gareth Glyn, who was born in Machynlleth in 1951, is a full-time composer who has lived since 1978 on Anglesey – an island which, though its landscape, history and legends, continues to be a key influence on his work. He was encouraged to compose music from an early age by Rhys Jones, his teacher at Ysgol Maes Garmon, Mold. His many compositions range from a symphony, concerto, overtures and other orchestral works to simple songs for children, background music and signature tunes for television, musicals and choral works such as Clychau’r Gog, that is now part of the repertoire of many Welsh male voice choirs. Gareth is convinced that music must appeal to the audience and be practical for the performer, and he adheres to this principle in all his works, as did three of the composers he most admires, Carl Orff, Aaron Copland and Benjamin Britten. He considers that all his works contain an element of his Welshness, from the huge symphony down to the shortest song. He was awarded an honorary membership of the Gorsedd of Bards for his contribution to Welsh music by the National Eisteddfod in 1991. He is considered one of Wales’s foremost choral composers, and some of his solo songs are part of the standard repertoire of some of his country’s leading singers. He composed the music for a great many musicals, and his opera Wythnos yng Nghymru Fydd (“A Week in a Future Wales”), which toured nationally in 2017, was judged Best Production in the Welsh Language in the Wales Theatre Awards 2018.